In my last post, we learned how one could use bindgen to generate Rust bindings for an Objective-c framework but didn't show you how to use them. In this post, I show how to actually use those. This will involve:

Many have written about doing this but let's do it again

cargo new --lib use-uikit-sys but you can name it whatever you want. I'm naming it this way because it matches the directory in my simlay/blog-post-examples repo under the use-uikit-sys directory.

Then you need to add winit and uikit-sys as dependencies but I like to also add logging facilities as well. Your Cargo.toml should look something like:

To get started with winit, do exactly what's on their current guide. So, your src/lib.rs should look like:

For the case of an example, I'd say cargo-bundle is the quickest way to bundle an app but it's got some issues. It requires a description field in your Cargo.toml which isn't there by default.

First off, you need an example to run in your bundle so you need to add mkdir examples and then put the following in examples/uikit.rs:

Then add a package.metadata.bundle.example.uikit section to your Cargo.toml. Your Cargo.toml should now look like:

At this point, you should run install cargo bundle, bundle the example into an iOS app, install the app on a simulator and start the app as such:

I tend to put this stuff in a Makefile.

You will obviously need to have the Xcode installed and an iOS simulator booted up. If you're not familiar with xcrun simctl commands, nshipster and xcblog are good sources.

Anyway, after you've ran xcrun simctl launch --console booted com.github.simlay.uikit, the shell console should hang and display something like:

Where in this case, 53589 is the PID of the app and The app has started! is from the println! in the code above. Going over to the iOS simulator, you'll notice that it's entirely blank. This is because we have literally nothing for view. That's in the Adding some stuff to the view below.

I've used cargo-bundle for iOS and fixed various issues but this is an issue I'm not sure how to fix burtonageo/cargo-bundle#91. For iOS features which you need to need to know how your layout works, you might want to use xcodegen. It's a lot more complicated than cargo-bundle but worth it.

Anyway, first off install xcodegen and cargo-lipo, then you'll have to turn your crate into a staticlib by adding this to your Cargo.toml:

The lib will keep the existing functionality of cargo-bundle.

add the following file to project.yml:

This describes the project layout to xcodegen which then generates an Xcode project. With this setup, you'll need:

This is the only bit of non-rust programming in this project.

For now, bindings.h is hardcoded to match the function from src/lib.rs but if you want to do this correctly, I recommend adding build.rs to your crate, and use cbindgen to autogenerate the contents bindings.h based on your #[no_mangle] extern fns in your crate.

To make this project run:

At this point, you should get the same result as the cargo-bundle section:

You can also just run xcodegen and open uikit_example.xcodeproj and push the magic play button. Similar to the cargo-bundle section, like adding a Makefile for these things.

One annoying thing about doing it via the xcodebuild command shown above is that the -destination 'platform=iOS Simulator,name=iPhone SE (2nd generation),OS=13.6' argument changes with new updates to iPhones and iOS versions. Someday I or someone will figure out a nice way of getting that argument from xcrun simctl list but for now we hard code it.

Adding some stuff to the view§

So far, all we've done is make an app with a blank screen which is pretty uninteresting so, let's add some views.

To do this we'll need to import some new things:

And then once you've created the window you need to get the root view via:

If you rerun the bundling steps from either the cargo-bundle or the xcodegen and you should have a yellow app as seen here: 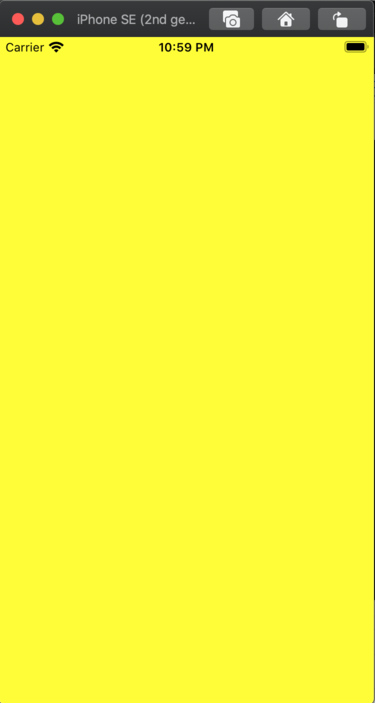 So, first off when we do UIView(window.ui_view() as id); this is converting the c_void that winit use for the root view and then casting it to an id which is a pointer to the objective-c object. It's actually the same type internally in the Window struct. Once we do that, we need to use the building blocks generated from the uikit-sys crate.

One aspect of doing rust targeted at iOS is that docs.rs doesn't have the any docs for any iOS targeted stuff. It's due to iOS targets needing xcrun installed on the system and docs.rs runs on ubuntu. To really get docs for your project, you should do cargo doc --target x86_64-apple-ios --document-private-items --open to get the winit and uikit-sys docs.

Now, the unsafe block to run root_view.setBackgroundColor_(UIColor::blueColor()); is the thing that actually set's the color. This is required to be unsafe because everything inside of that logic is autogenerated from the UIKit framework headers and crosses the FFI boundary. If you're curious where they are I recommend looking in $(xcrun --sdk iphonesimulator --show-sdk-path)/System/Library/Frameworks/UIKit.framework/Headers/

Anyway, bindgen produces some typed bindings for objective-c. I've spent a bit of time in the last year trying to make them better. So, UIColor::blueColor() returns a UIColor which is just:

Now, the root_view.setBackgroundColor_(UIColor::blueColor()) matches the background color instance property assignment which is the objective-c equivalent to:

Due to the FFI aspect of this, the above statement doesn't translate to rust so to assign things, bindgen gives you setFoo_ for a property Foo that is not readonly.

In order to use the setBackgroundColor_ function, you need to import UIView_UIViewRendering. this is because the background and other rendering methods are all in the UIViewRendering category of UIView. From what I can tell, the objective-c engineers at apple use categories as way to organize the sections of code.

Let's add some text and a text field.§

Let's write a function that's called upon the Event::NewEvents(StartCause::Init) branch of the main event loop in winit:

with the add_label function thusly:

Rebuilding and running the app you get: 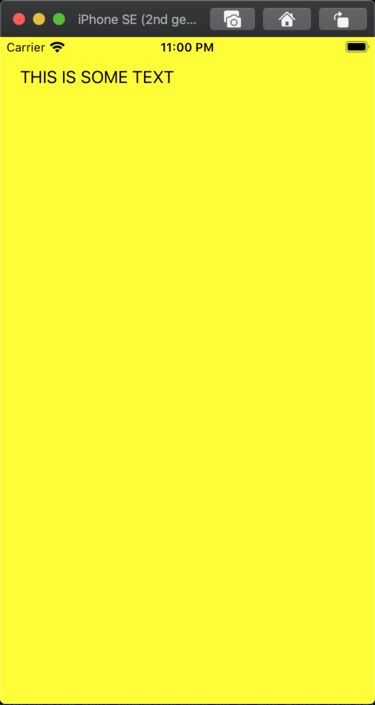 You'll notice that this is quite a bit of code with a huge unsafe block just to get a bit of text on the screen. In fact, there's more unsafe function calls here than there are safe function calls. The only thing that really could be factored out of this block is the creation of CGPoint, CGRect, and CGSize. In my original implementation of this, I actually had the CString conversion in the unsafe block but after reading the docs for as_ptr. I concluded that this exhibited some undefined behavior.

That is why there is:

If you were to do let text_ptr = CString::new(label_text.as_str()).expect("CString::new failed").as_ptr(), you might end up with some undefined behavior.

So, the question here is "when initWithBytes_length_encoding_ is called, does it take ownership? Otherwise will there be a memory leak?". If we look at objc-foundation and core-foundation, these implementations imply that the memory is copied when passed to the Objective-c side. I've failed at finding a place where it explicitly says it copies the bytes on the objective-c side but if initWithBytesNoCopy:length:encoding:freeWhenDone: doesn't copy the bytes and optionally frees it, that implies that initWithBytes:length:encoding: does copy the bytes.

Will this leak memory?§

So, what happens if we call add_label multiple times? Well, in short, it currently leaves the memory allocated and the objective-c side of the FFI leaves this as a dangling pointer. We should definitely feel bad about it but I or someone else will write a post on how to do this in a more correct and safe way.

In the past, I've made iced work on iOS but there was no keyboard input and makes it a little hard to use. So, using the native keyboard pop up and work is pretty important to an iOS app.

To start, Let's put a add_text_view call in the Event::NewEvents(StartCause::Init) branch of the main event loop in winit similar to above:

And add a add_text_view function:

Now when you bundle the app you will have something like: 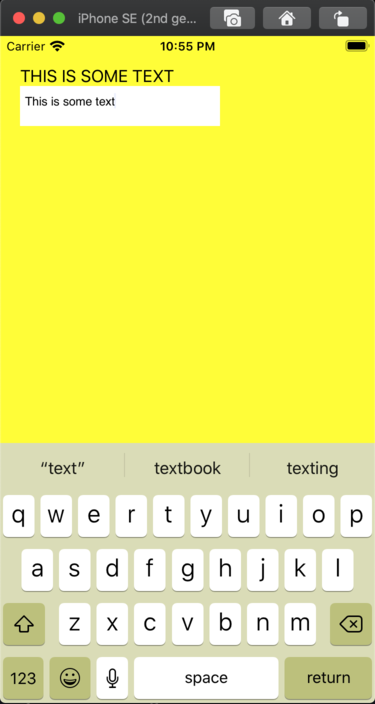 Funny enough, this section is much simler than the UILabel section but mostly because a lot of it is the same idea. We're not passing in pointers to CStrings, we're passing in some structs for the geometry of the frame across the FFI. Similar to the last section, we've just thrown memory collection out the window for now.

The most annoying thing about this development is that you will need to read both the Apple's UIKit docs and the generated docs from uikit-sys. There are plenty of comments in the objective-c headers but adding them to the generated rust isn't an option. Perhaps it's possible to have source maps?

Due to the nature of working on such an obscure subject, I have been passing the buck on the topic until this post. Apple has recommendations page which I think the objective-c features retain and relaese could actually match well with Clone and Drop in rust but that's a discussion for another time.

So, this is a way you could in theory build an iOS app. It's missing a lot. Things like the text input events are missing, updating different events are missing, basic memory management like if you were trying to burn the bits. Because of this, I cannot say that I would recommend uikit-sys over SwiftUI or just plane ol' objective-c and UIKit. From what I can tell, this is the first time someone's tried this hard not to build an iOS app using so few of the apple recommended libraries. I'm not even sure that this type of work will pass some of the apple automated app review stuff.

What we (or maybe just I) should do is use uikit-sys in something like iced which would make that something similar to a mobile-friendly-cross-platform GUI crate. I will leave that guide for another time :)